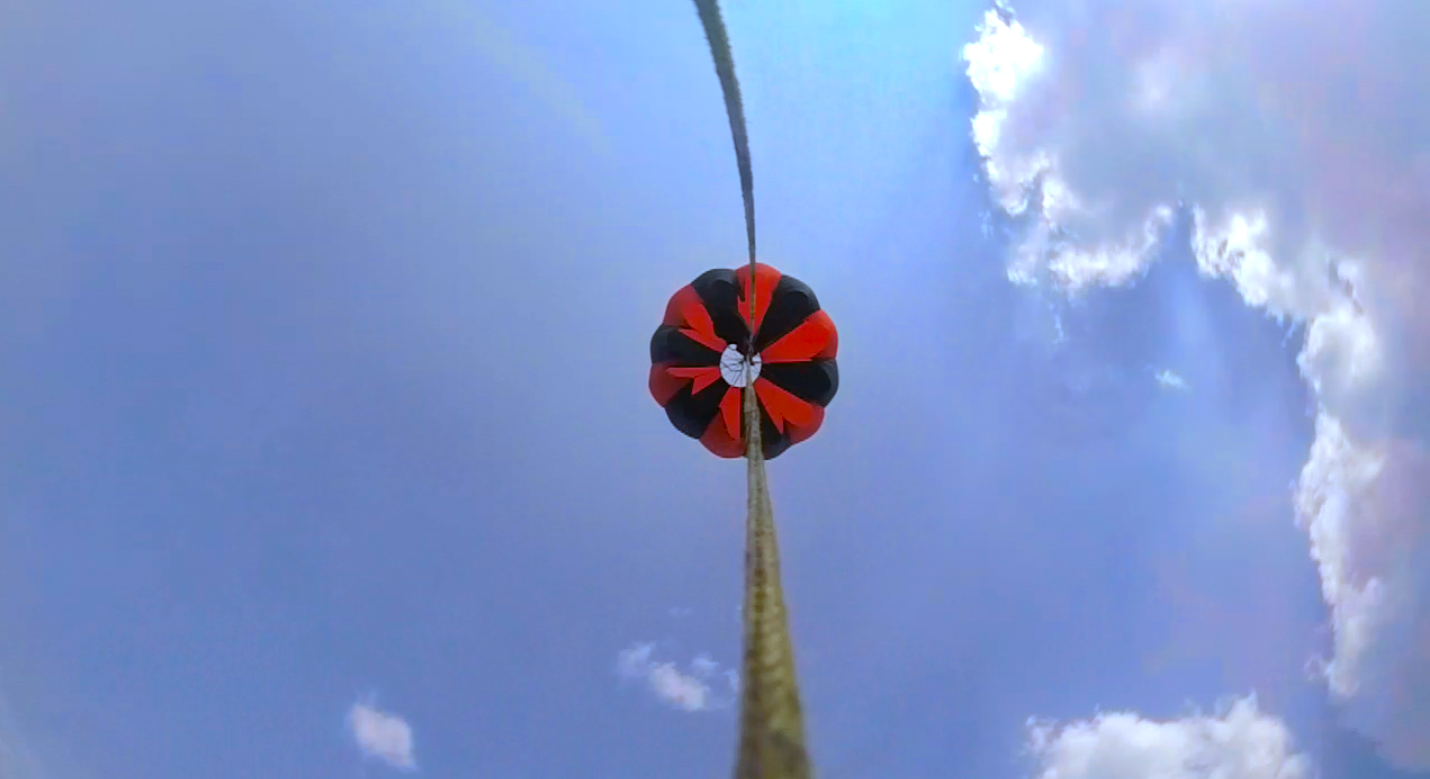 Another project I am working on for AerospaceNU at Northeastern University is a line cutter for disreefing circumferentially reefed parachutes. I designed the mechanics for our current version and have also performed car-mounted testing to validate the system.

The purpose of the line cutter is to provide a light-weight reefing system that is not exposed to large shock loads when the parachute is deployed and during disreefing events. In contrast with the center shroud reduction reefing system which I have also developed, it carries a very small fraction of the overall drag force on the parachute. However, it requires that electronics be mounted directly to the parachute, which poses a potential risk for entanglement and various electronics challenges. We are in the process of extensive testing to validate the system, and the current version has executed over 10 disreefing events in flight so far, without any failures.

The current mechanical apparatus uses a nichrome wire to melt through reefing lines that constrict the throat of the parachute. The main challenge with this strategy is that the nichrome wire must consistently press up against the line it is intended to cut, but it must not be loaded significantly by the tension in that line, because the nichrome is very thin. Currently we are using 28 awg wire to reduce power requirements for the electronics controlling the system.

To solve this problem, the nichrome wire is mounted to a hinged flap. The line to be cut is passed over the nichrome such that the flap is depressed when the the line becomes taught. When the flap lowers, it pushes against a springy tab. However, the flap and the line are positioned in the casing such that the tab will never be depressed more than a few millimeters, regardless of how much tension there is in the line (see the pictures above). Therefore, the maximum force on the nichrome is consistent. I have iterated on this concept three times to minimize the volume and improve ease of assembly. Earlier versions contained parts that were easily lost and correct assembly was difficult. In the current version, all components (top, bottom, battery cover, and spring loaded nichrome flap) hinge around the same axis and can easily be folded together like a book prior to launch.

So far, the apparatus has performed well. Prior to flight, the mechanism was tested using the car-mounted apparatus.

Then it was tested in flight on TRD (a 11′ tall 5.5″ diameter testbed rocket) with the electronics turned off to verify that a circumferentially reefed parachute would open properly with the line cutters attached. This test also served to verify that the nichrome wire would not break when the line experienced in-flight loads. We had hoped to perform the test with the electronics operational, but the barometers were behaving erratically prior to launch, so we modified the testing plans.

While the avionics team was working on the barometers after that launch, I put together a very simple board to allow us to test the mechanics of the system without having to rely on the barometers. This simple board uses a photoresistor to detect ejection, and disreefing events occur after preset time delays. I flew it with the photoresistor board twice on February 28th in my certification rocket. It executed two disreefing events flawlessly on both flights. On the same day, the prototype barometer-based boards were flown on a different rocket with my previous mechanical design. One of the boards functioned properly and so did the mechanism, allowing for one successful disreefing event. The other barometer board malfunctioned. Shortly after, the avionics team developed a new control board that has proved to be very reliable. Since then we have flow line cutters on more than 10 flights without failure to test electronics, code, and my various iterations of the mechanical system.

Video captured by a camera mounted to line teathering the parachute to the main body of the rocket during the August 21 TRD test flight.